I hear the train whistles
long before I can hear
the sound of the heavy wheels
and high speed clacking
of the real train,
the sound of romance, old days, civilization.

Without the train,
my country would have settled
much more slowly.

In my thoughts
I see tracks over wide spaces,
mountains, rivers, forests.

I hear my Dad telling me
that when the train came to Lubbock
that is when the town began to grow.

I hear my Mother telling me
the story of her family coming
to West Texas by train in 1920,
when she was a cute little blonde,
only four years old,
to begin a new life.

These are the moments that
grew a country.

I hear all that as the train passes through
on this crisp, cold morning in Canyon, Texas. 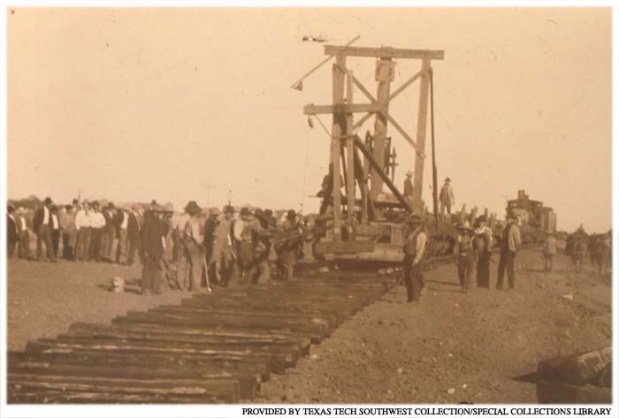 Workers lay down railroad ties in preparation for the first railway to come to Lubbock in 1909. The city reached an agreement earlier that year with Santa Fe Railway to bring train service to Lubbock which laid the groundwork for the future Hub of the Plains. (Lubbock Avalanche-Journal Centennial Edition 2009)