Good morning! I got a little too verbose the other day on my post about our one day bus tour to the Cliffs of Moher and the west coast of Ireland. I’ll try to do better today!

After we left the Cliffs of Moher, we continued to follow the western coast of Ireland in a northward direction. We were going to eat at a little pub along the way to Burren National Park. Our bus driver/tour guide, Wayne, kept getting messages along the way that Prince Charles was in the area and was worried we would be delayed by the procession, but so far we had seen no evidence of him.

We passed by Galway Bay. It truly is a beautiful place to see. The entire western coastline of Ireland is awe-inspiring because of the raw beauty of the cliffs and the ocean beyond. I would urge anyone visiting Ireland to make this a part of their trip plans.

We finally stopped to eat at Fitzpatricks Pub in Doolin and it was a quick lunch, but the food, service and atmosphere was absolutely delightful. Fitzpatricks is well-known as a gathering place for musicians, but since it was the middle of the day, no local music was to be heard. You know how you imagine Irish pubs to be these rather dark, low-ceilinged, places where people gather to visit, eat, and drink? Fitzpatricks is the very epitome of that image. My husband had the Irish beef stew, which was very good, and I had a truly Irish lunch of cabbage, ham, and mashed potatoes that were the best I ever tasted. My mother made boiled cabbage frequently and I love it, but my husband is less of a fan of it. I felt like I had gone home to eat at Mothers when they brought my plate out. They provide a lot of food, so there are no worries about going hungry there!

After we left Fitzpatricks, which unfortunately I did not get a picture of, several of us were hanging out across the street waiting for everyone to meet at the bus to continue on our journey. While I didn’t get a photo of the pub, I did get pictures of this peaceful bucolic scene directly across from where we ate. 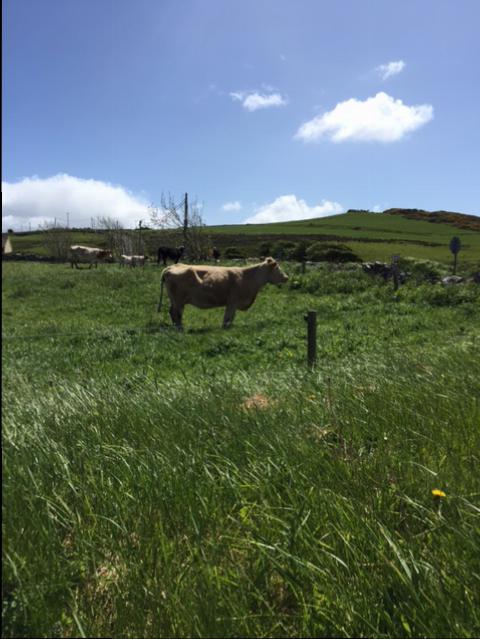 Cows across the street from Fitzpatricks Bar. He was very interesting to talk to.

After we left Doolin, we proceeded on to the Burrens, which is a rocky, conservation area established by Prince Charles’ favorite uncle. As we arrived there and our driver was encouraging us to get out and see the fauna there that is seen nowhere else in the world except north of the Arctic Circle, it began to rain. Between slick rocks and misty rain, Alan and I decided to wait in the bus. Suddenly, our tour guide/bus driver bounces into the bus and says to me, “What’re ya doin’ in here love? You’ve GOT to see these flowers! You can’t find them anywhere else in the world but here and north of the Arctic Circle!” I laughed and replied, “I’m afraid I’ll get out there and fall on those wet, slick rocks and it’s COLD out there!” His response was to grab me by the hand and pull me out of my seat, saying, “I’ve got an extra coat just for you!” So I put on his puffy hooded coat and out we went.

As Wayne, our tour guide, walked me over to the pasture area where everyone was tiptoeing and taking pictures of incredibly tiny flowers, he said that the dark pink flowers were part of the orchid family. To get to the little pasture meant climbing over a partially knocked down brick wall, very slick, and Wayne helped me over it. The tiny little flowers were beautiful and I’m so glad I got out of the bus! I think we’re often like this in life. There is so much to see and enjoy in the world, but we’re afraid we’ll get hurt if we get out of the bus. These are the rare wonders of the world that I saw when I got out of the bus: 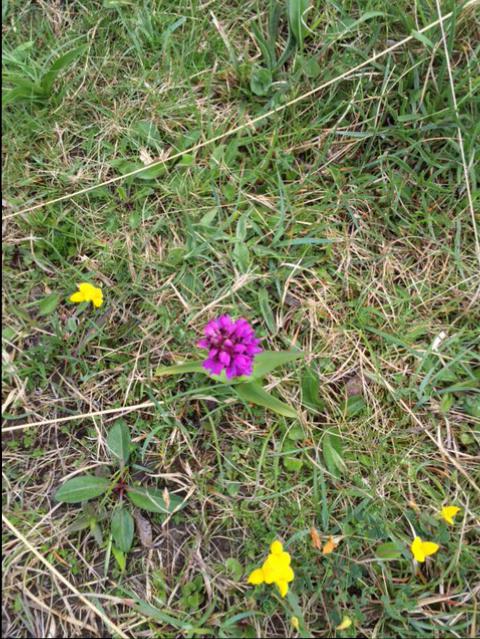 Oh, not long after we saw these beautiful flowers, guess whose motorcade passed us on the little two lane road? Ding, ding, ding! You guessed it! Prince Charles himself!