Tuesday, May 19, 2015, 6:50 AM
We were told to meet our tour guide in the middle of Dublin at the Old Stone Church on Suffolk Street. When we arrived, we realized that there were several tours starting from there and heard a man shouting, “Cliffs of Doher Day Tour, follow me this way please!” A sleepy band of travelers tried to keep up with the energetic fellow, who introduced himself as Wayne, our tour guide for the day. As we each presented our vouchers and boarded the bus, Wayne looked at Alan’s voucher and said, “Alan Lane, Irish, right?” Alan was a bit taken aback, but said, “Well, at least part of me is Irish. The rest is mostly English and Scottish I think.” The bus was luxurious, immaculate, and comfortable. After everyone boarded, Wayne the Tour Guide told us that this would be a long day, but hopefully a fun one for everyone. He mostly had two rules. Rule #1 was that everyone be back on the bus at the times he told us to be back on the bus because it was going to be a very busy day and dawdling and being tardy would delay and inconvenience everyone on the tour. He reassured us there would be plenty of opportunities for bathroom breaks and such. He said that we might actually see Prince Charles that day as he was coming to Ireland and on that day was scheduled to see the Burren, which his uncle particularly liked and where his uncle and several other royal family members were killed by the IRA in 1979. (Our tour included a trip to the Burren also so the possibility of running into Prince Charles was high, but unlikely according to Wayne.) Prince Charles’ tour was billed as next phase of improved relations initiated by Queen Elizabeth’s first State visit to Ireland in 2011 and President Higgins’s first State visit by an Irish president to Britain last year. It turned out that Prince Charles’ trip to Ireland was also a historic one as he was to meet Gerry Adams, noted leader of Sinn Fein. Wayne the tour guide said the only problem with the possibility of seeing Prince Charles was that traffic and the tour might be delayed if we did happen to be in the same place as His Majesty, but he would try to stay on schedule as much as possible. Rule #2 was that we not trash out the bus or, if we did, that we clean up after ourselves before leaving the bus at the end of the day. Then off we went to explore the west of Ireland!

As we set off on our tour in the early morning, one of the first things I noticed was the very smooth and new looking highway we were traveling upon. Apparently Ireland had only in recent years developed a limited access roadway system (similar to our interstate highways) that allowed faster travel throughout the country. Also, I couldn’t help but be impressed by all the beautiful green countryside. 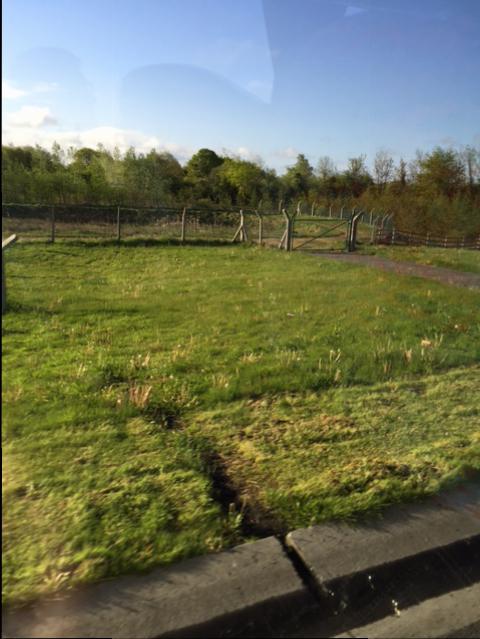 Beautiful green Irish countryside in the area where some of the world’s best race horses are bred and trained.

Wayne was obviously an Irish history expert and very proud of his country and his countrymen. As we traveled along, he gave us a complete history of Ireland from the Vikings to the current day. At every stop or even when passing a point of interest, he would tell us the historical significance of the place and point out fun things to know too. He was a jolly fellow and hilarity ensued throughout the bus frequently. We stopped in Limerick at the River Shannon so we could see King John’s Castle, built in 1200, which is one of the most intact old castles in Western Europe. Since we were there for about 15-20 minutes, we took pictures. Well, of course we did. That’s what tourists do when at historical locations, right? 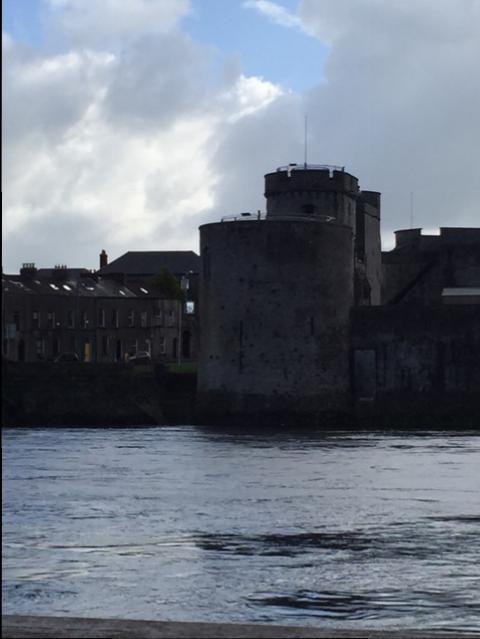 King John’s Castle on the River Shannon in Limerick, Ireland.

We continued on our journey a little further and stopped at the Obama Truck Stop for a bathroom break and refreshments if we desired. (I kid you not! President Obama’s family traces back to the town of Moneygall, Ireland and he went to visit the town and area in 2011.)

On the second floor of the Obama Truck Stop there is a complete exhibit of American Presidents of Irish descent. I visited quickly as time was short and bathroom breaks are important, but it was really very fascinating!

If you’ve ever wondered what the town of Limerick looks like (especially if you’ve read the memoir, Angela’s Ashes), here is a view of the town. It’s very cute and quaint looking now, but I can imagine there being some very hard times of poverty here as well.

After a short while, we got off the Irish super highway and, as Wayne warned, were on the most narrow and twisted country roads I’ve ever been on in my life! As Wayne made several turns in small towns and navigated our huge bus around some very dicey looking twists, I have to admit I just closed my eyes! I was sure he was going to hit some of the building corners as we turned, but we often missed them by mere inches! In one particular tiny town on a very tight turn, we could see where other buses or vehicles had left their marks on the yellow building corner we passed. I was most impressed that we got such a close view of it, but also breathed a sigh of relief that we didn’t leave our mark as well!

Around 10:00 AM, we finally reached the Cliffs of Moher. Honestly, this was the most impressive view of Ireland that I encountered. The Cliffs are huge! They are all stone and the drop to the Atlantic Ocean is quite awe inspiring. Long before our trip to Ireland, I had imagined myself and Alan walking along the cliffs and spending time gazing out upon the ocean in a moment of perfect tranquility. Reality infringed itself upon my daydream when we were actually there. It was rainy with cold moist gales cutting right through our clothing. We scurried out of the Visitor’s Center as bundled up as we could manage to a view a jaw-dropping scene of the wild beauty of the Cliffs. They definitely are beautiful and awe inspiring, but there was no way we were going to be part of the brave people who actually walked out onto the Cliffs to gaze at the sea. Heck, we could barely stay on the path, much less walk out further without fear of being blown straight down those dramatic cliffs to the ocean below! We took some hurried, ill-posed photos and then scurried like the cold little varmints we were back into the Visitor Center where we could sit in the little cafeteria with hot coffee and view the Cliffs from the huge windows they had just for that purpose.

Elaine and Alan Lane on the Cliffs of Moher, Ireland.

Cliffs of Moher. Beautiful, dramatic, ancient, and freezing cold in May!

While in the cafeteria, we struck up a conversation with a young woman who, it turned out, was from the state of Wyoming, which is just directly north of Colorado, our home state! She had been to Ireland a couple of times and the Cliffs were one of her very favorite places to visit. This time she had convinced her brother to go with her and he was one of the brave souls actually walking out onto the cliffs. She had done this before so on this day was taking refuge in the cafeteria as we were. She was in her 20’s and had toured all over Europe before with just a backpack and herself. I envied her independent spirit and ability to just go, by herself, and see the world. After chatting with her, we went to the area that described the geology and development of the Cliffs over the centuries as well as the history of the area. The Cliffs are in County Clare, which was devastatingly hit by the Potato Famine of the mid 1800’s. It’s a beautiful area, mostly inhabited by sheep farms and sturdy farming families who can endure the wild beauty and bleakness of cloudy days and stormy nights. We proceeded on to the ever-present gift shop and bought some gifts and souvenirs to take back to our family and friends. As I was looking at the wide variety of souvenirs, I realized that anything we brought back from here would never adequately relate to our friends and family the effect this wild area has on one’s heart and soul. Here is where I felt truly in the arms of Ireland and its wild and oftentimes cruel history. How can that be related through trinkets or photos of any kind? This is a place that people must see for themselves to really feel and understand Ireland. Nonetheless, we bought gifts and souvenirs and I took many pictures of the area to attempt to convey this soulful area. Below are some of the photos I took. Note in the third picture down, there is the crumbling remains of a home abandoned during the Potato Famine of 1845-1850. These are seen all through the area and are painful reminders of that difficult, killing era. Before the Potato Famine, Ireland had a population of over 3 million people. After the Potato Famine, due to deaths and immigration brought on by the Famine, the population had dropped to only about 1.7 million people. I will continue with the second half of our tour tomorrow as I’ve blathered on long enough today, I’m sure! 🙂
Peace and love, Elaine